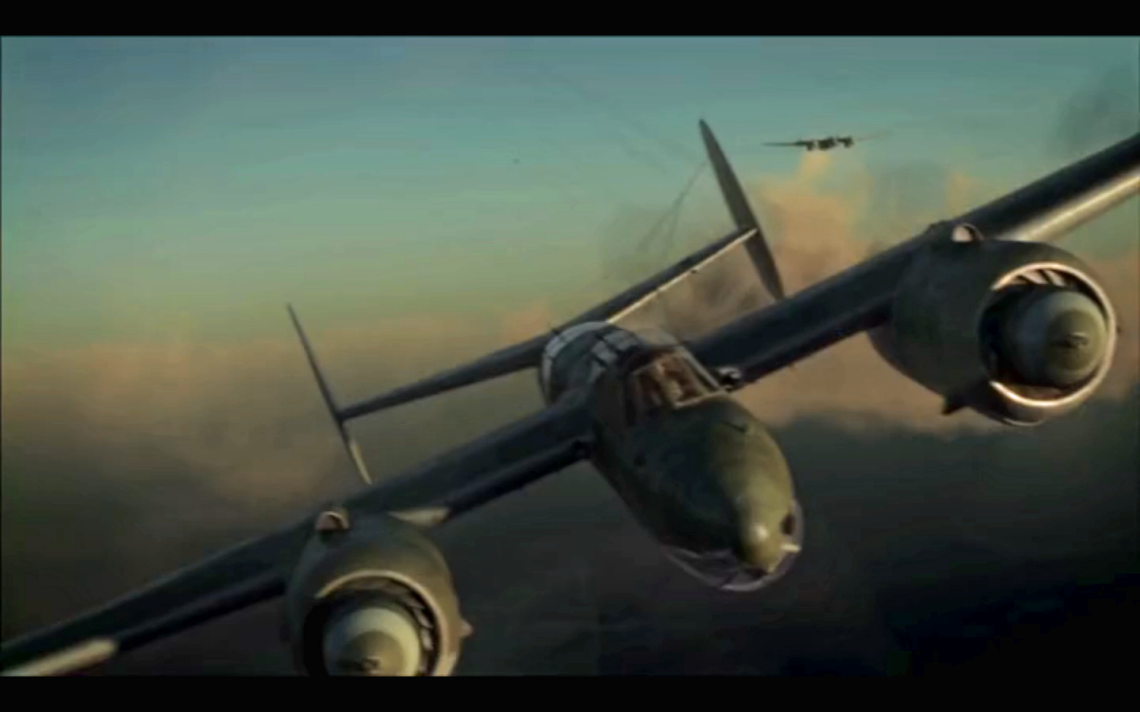 The Bomber (2011)  –  Vitaliy Vorobyov directs this colorful adaptation of Mikhail Veller’s short story, and Arkadiy Tigay brings it to life with a masterful screenplay. The result is a fantastic historical drama produced as an eight part mini series that originally aired on Russian TV and later, in its entirety, on Hulu. (Edit, as of May of 2018, it is now available with Amazon Prime, thankfully, here.) It is my all time favorite ‘war movie’ and has the feel of a complete and thorough novel. This review contains plot spoilers and lots of pics.

Its not often that a film project feels complete, and that is the usual complaint when novels, books and stories are translated to the film world. So often we leave a film having experienced a 90 minute rushed movie instead of a satisfying and complete story. For the reader’s info, there is a DVD version of this series available, but it has been heavily cut down and had at least 100 minutes removed. I can’t imagine what an editor would possibly find to cut, other than some of the many sub-plots that make the story so compelling and enjoyable. After all, the full series contains the writer’s and director’s complete and finished vision. The edited version seems to me to be like cutting off 1/3 of a great piece of art just to make it fit in the frame. I can’t imagine this series with so much removed, so this review pertains to the original eight part work as it was originally intended to be viewed. Sadly, at this time, it is not available in DVD or Blueray form in the US as a full series and must be viewed online. The DVD version is reviewed favorably too, but go for the whole experience.

This story is a tale of love and war, two things all men should be firmly knowledgeable about. It is a rare case of faithful love at first sight. It tells the story of a very scarce and truly noble faithfulness that is tested and tried through both war and through the tyranny of the Soviet political monster. Along the way we experience friendships, betrayals, Partisan combat, political oppression, covert ops and spying – all told through believable and robust characters.

In storytelling, literary or cinematic, there is no greater story than a tale of devotion and sacrifice. It is a time-tested formula as old as storytelling itself because it touches every soul, everywhere. Place this classic formula in a harsh and dangerous historic setting and the product is an adventurous chain of powerful challenges that threaten our two protagonists. Its not hard to root for the heroes, to despise the villains, but then there is a whole cast of characters who walk the gray area between. Andrey and Katya – The main characters are endearing. Ekaterina Astakhova plays Katya Flerova who steals the heart with her wholesome smile and happy countenance. Nikita Efremov plays Kapitan Andrey Gritsov, a young man of principle and devotion. Immediate empathy is formed between these two and the viewer, and we’re hooked into a long and bumpy story of wild ups and downs, betrayals and loss, one challenge after another. Kapitan Gritsov is introduced first as a pilot of a Tupolev Tu-2 bomber who’s actions are brave but who’s unfortunate crash places him under the scrutiny of the district NKVD political officer as a potential traitor. This relationship degrades almost immediately as Andrey calls the NKVD officer the equivalent of a “desk jockey.” The thuggery of Marxism is on full display in the NKVD, which adds a serious threat to the tale – one that is more ominous than even the bullets of the enemy.

In the midst of getting to know Gritsov, the story brings us the second protagonist, Katya. Katya is introduced as a leader of a Soviet Young Pioneers group. We meet her first on what appears to be a Young Pioneers boat excursion where the guest of honor is none other than ‘glorious patriot-pilot’ Andrey Gritsov. His task is to tell the children about the glory of the Soviet pilot and how the invading Fascists are being torn to ribbons by brave aerial warriors. Andrey and Katya, however, have eyes for one another and through the rest of the Young Pioneers event and into the night, the two discover that there is a deep bond forming. Andrey must return to combat, and no one yet knows Katya’s future, but she tells Andrey that she is an expert in communications and has received high marks in radio school. Her challenge to Andrey comes in the form of a brief Morse code message that he must figure out. To his delight, he discovers the love of his life.

The story then film commences upon a powerful journey through love and war, devotion and torture, duty and hope. It is my all-time favorite war drama, bar none.

The episodes move the viewer along at a good pace, even for seven-plus hours of cinema, a lot of story is packed into one episode. Each episode opens with a recap of the last. The general plot follows Andrey as he must drop off a radio operator behind the lines to assist a partisan group, and that operator turns out to be his fiance. They get shot down and spend their time avoiding capture, escaping capture, or fighting alongside the Partisans to disrupt the German V2 Rocket test program nearby, all while dealing with betrayal and schemes from among supposed friends. The cast of characters includes dozens of well-written supporting roles, but my favorites are these:

Linko – A persistent presence from the beginning to the end is Starshiy Leytenant (Senior Lieutenant) Georgiy Linko, the navigator and friend of Gritsov who is himself a treasonous sellout. His character is the height of despicability. He is a deeply troubling character but one that adds a brilliant dimension to the story. His tenacity is evident, but he’s well controlled by his handlers, to whom he all too eagerly sells out. Linko is all about self preservation and has not one ounce of concern for others. Fidelity is a foreign concept to Linko. As a murderous villain, he serves as a fantastic counter-balance to Gritsov. In the prison camp, it is clear who has principles and who is the louse. Linko and Andrey come to understand one another quite clearly.

Walter – The boy Walter, the assistant to Holt, who befriends Katya and ultimately is the door by which she gains access to the Nazi headquarters. While possessing some redeeming qualities, Walter is clearly brainwashed by der Führer’s statist indoctrination and this leads him to be a bit naïve and idealistic (much like today’s brainwashed socialisti youth). He gets quite annoying and sycophantic, and he proves rather pitiful in the end. A good character to move the plot along.

Grinia – In the forest we meet the partisan unit, among them the lovable Grinia, the “clumsy bear of a man.” Grinia is a devoutly religious pacifist who cannot employ violence, but he is pushed to do just that. His love for the camp nurse, herself a bit of a loose and crude woman, ultimately prevails. He’s one of my favorite characters because he’s a rare pure-hearted soul who – odd as his piety might be – is at peace with God and practices his convictions regardless of what everyone else thinks.

Herr Holt – On the dark side, we meet SS Sturmbahnfuehrer Holt. The dapper “Herr Holt,” as he portrays himself to his band of turncoat prisoners, is played by Dirk Martens. With his piercing eyes and strong facial contours, he is a perfectly cast actor to depict a dastardly and diabolical Nazi. His arrogant expressions and tense self-control barely cover the smoldering cauldron of vengeance and contempt underneath, and that rage bursts forth many times in episodes of arrogance and hate. He is the perfect Nazi character, living in a fantasy world as a self-appointed supreme being with power over life or death. His casual dismissal of any life he deems unworthy carries the same heartlessness as that of a modern abortionist who profiteers on tearing people limb from limb with the blessing of the government. Cold, cruel, heartless butchery. Holt suppresses his humanity.

Kryshchuk – Maksim Vazhov plays Kryshchuk, another well-crafted character who runs throughout the story. He is the conflicted man who’s real allegiance is to his own well-being. While cowardly, he has a remnant of a conscience, and this redeems him to some degree. We meet him as a German-sympathizing district police officer who, covertly out of a burdened conscience, saves Gritsov’s life from the district chief’s creepy torturer (who, I must add, is able to make skin crawl with one glancing grin. See pic below). We meet Kryshchuk at the end of episode 2 and learn more about him in episode 3, and there are hints that he has a dark past with regard to the resistance that keeps him from joining them. He believes they will torture him; clearly this man has a few moldering skeletons in his closet. What  this character helps make very evident in the story is that everyone makes some choice of allegiance, sometimes you get a second chance. Kryshchuk is a coward. But he’s got a bit of a conscience, and he saves Gritsov a second time. In doing so, earns a few more breaths. Redemption is a high price for Kryshchuk.

The film culminates in some heart wrenching scenes of great tension, a pretty good dramatic cliffhanger at the end of episode seven, and some moments of great drama. The Soviet machine is ridiculed openly and the only true and transcendent good is recognized as love. While I’d have issues with that conclusion, they film gets an A+ for telling the classic tale with excellence. I won’t spoil the rest, and as with all good stories of this sort, there is appropriate, roller-coaster closure to the whole thing.