Book recommendations included in this review.

Director Tim Blake Nelson adapted his play of the same name for the screen. He delivers perhaps one of the most grim and mournful tales of the Nazi holocaust ever to be viewed on film outside of eyewitness documentation. Based on Dr. Miklos Nyiszli’s incredible book Auschwitz: a Doctor’s Eyewitness Account, Nelson captures the horrors and ethical dilemmas of the Sonderkommando units working the killing apparatus in the Nazi death camps. Having read Nyiszli’s book, and most (I believe all) of the other Sonderkommando survivors accounts, I believe The Grey Zone (2001) portrays the evil of Hitler’s ‘final solution’ accurately enough to disturb most decent humans and to remind us how all tyrants must always be opposed.

If you do not know the story of the Sonderkommando (the ‘special’ units) at Auschwitz-Birkenau extermination camp, this film will be a very bold introduction to this crushing page of history. These men were the Jews and prisoners who were selected out of the masses to operate the gas chamber, the crematoria, and the various other unpleasant tasks associated with mass-extermination. They did so in exchange for temporary favor, booze, food and better treatment. After a period of time, each Sonderkommando group was itself liquidated. This tale is based upon the true story of Sonderkommando 12, the second-to-last group, who rebelled and successfully destroyed one of the Auschwitz crematoria in the process. The film is set in October of 1944.

What carries this film and makes it so very powerful are the multiple tracks of ethical dilemmas presented to the viewer. Dr. Nyiszli himself is faced with the terrible prospect of being chosen as a pathology assistant to the diabolical Dr. Joseph Mengele, the terrible pseudo-scientist of Auschwitz who’s true belief in Hitler’s ‘pure race’ nonsense propelled him to horrific experimentation and to build gruesome human specimen collections. Nyiszli was presented with the options: either assist Mengele, or die. Nyiszli chose to assist, much to his own conscience’s harm. Before we condemn him too quickly, we learn that he saw this assistance not as a compromise of principles, but as an avenue to protect his daughter and wife who were kept in the women’s section of the vast concentration camp. Here is an immediate “what would YOU do moment.”

The film masterfully communicates terrific strain produced by his choices, especially in an excruciatingly dramatic, very tension-packed scene when Nyiszli speaks with his evil and unstable boss about promises made. The ethical challenges abound. 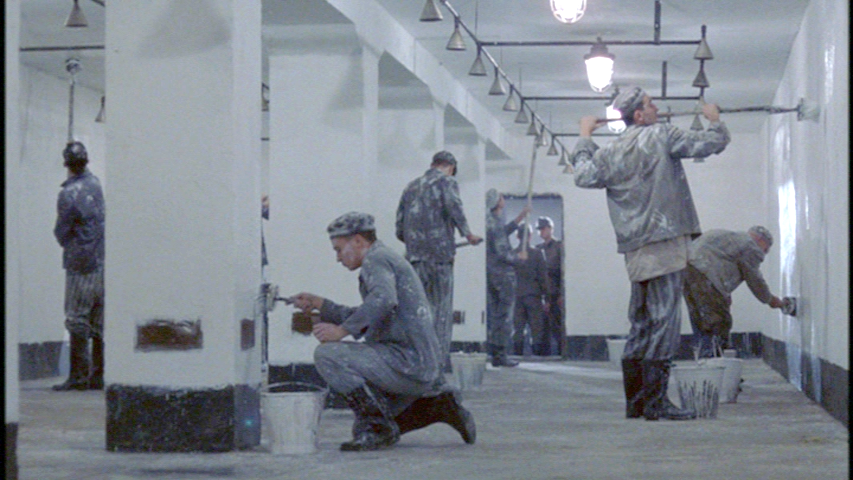 In the film we are confronted with the brute reality of Auschwitz, where Jews lied openly to fellow Jews and ushered them into the gas chamber in an orderly fashion, soothed by the dystopic accompaniment of a multi-piece band. We see the brute reality of Jews hauling Jews like meat, disposing of their fellows in the crematoria, and shoveling their ashes into dump trucks to be dumped in the Vistula river. We see them feasting on loot taken from the luggage of the dead and trading stolen riches. It becomes difficult to view these men as human beings, considering their twisted lack of principle. Yet, there is an odd sorrow and empathy for all of them, for they have been – at least in their minds – forced into this despicable situation. We, and they, long for their personal redemption, if it is possible at all. Where does redemption become too far lost? At what point is a man merely a self-motivated monster and no longer able to seek his redemption?

Ultimately, the only redemption of any man, no matter how monstrous he is, can only be found in Jesus Christ. A mass-market film such as this can only leave us hopeless. It offers only an ineffective and flat man-based redemption scheme, thus nothing is left at the end of the story that truly closes out the tale in a satisfactory manner. It only serves as warning, with no solution given.

According to the tale, the opportunity to right their conscience comes in two ways – one is a planned uprising with smuggled weapons and explosives. The men hope to destroy the crematorium and make an escape in order to tell the world about this nightmarish slaughterhouse. But then, there is a compelling story based loosely on real events related in Nyiszli’s book. After a typical gassing, a young 14 year old girl survived the gas chamber! Her surprising discovery happens at the time the Sonderkommando rebellion is set to commence. Several of the men become invested in saving her life, murder is wrong, after all. They call in Nyiszli to help. I will not spoil what happens next, but will encourage you to witness this film as a testimony of what evil men’s hearts can lay upon the hearts of others. This film explores some serious ethical dilemmas and exposes the Nazi agenda for the twisted hell-born ideology it was. While it offers no true redemption and only leaves the viewer marveling, it is a warning film worthy of viewing. My oldest son, who is no stranger to being near-by the atrocities upon the unborn innocent at local abortion butcheries, was very powerfully moved by this film. It is fairly graphic, it is not for children, but should be seen by adults despite the graphic nature of the extermination camp, the evil displayed by men, and the foul language. Nudity is no where near sensual and while I have issues with depiction of nudity, it is appropriately handled if it must be viewed. The brutal face of Nazi Germany is well depicted here. Adults should see this film. 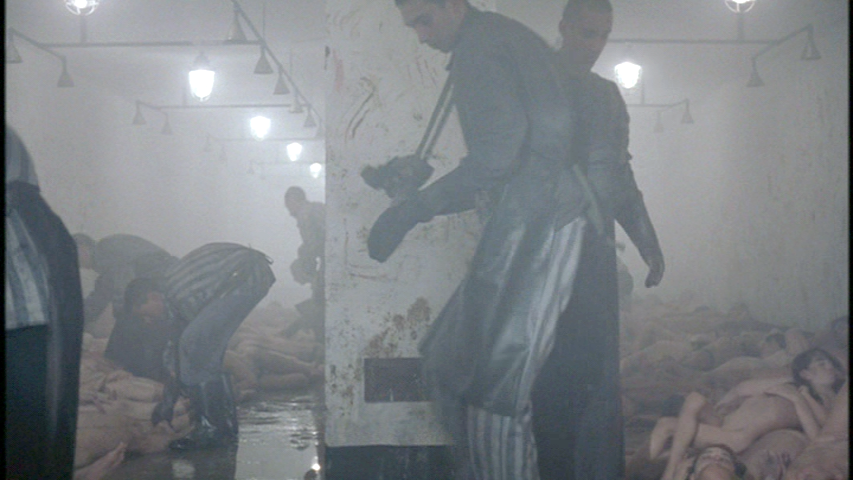 I read this book many years ago when it was new, but re-read it with new eyes and a better understanding after I read Dr. Nyiszli’s book. Pick Mengele: The Complete Story by Gerald L. Posner , it is the most accurate and detailed look at this mad man. Mengele is a fascinating character, a demonic and deceptive man. Though he avoided earthly justice, he is now dead. His tale inspired in me many sermon illustrations that speak to the lowest of man’s depravity and the great grace of God. Mengele is a terrible warning to all.

Another exceptional and brutal memoir from a Sonderkommando survivor is Filip Müller. His book, Eyewitness Auschwitz: Three Years in the Gas Chambers, is another must-read expose of evil. These are hard books to recommend, but the brutish force of wickedness applied must be witnessed in order that we do not grow complacent or live in denial.

A fourth book recommendation follows Tadeusz Borowski as he slaves for years in Auschwitz and Dachau. He survived the war but recounts the brutality of the same camp where Nyiszli and Müller survived. This Way for the Gas, Ladies and Gentlemen is a memoir of a man who ultimately gassed himself to death in his own oven. He could not live with the burden. He left it for us to handle and to learn from.

Finally, Schlomo Venezia’s harrowing memoir, Inside the Gas Chambers: Eight Months in the Sonderkommando of Auschwitz, is perhaps the most detailed and graphic – meaning sobering – account of the terror of the chamber and the life of a Sonderkommando.

A few more screen grabs from this sobering film: 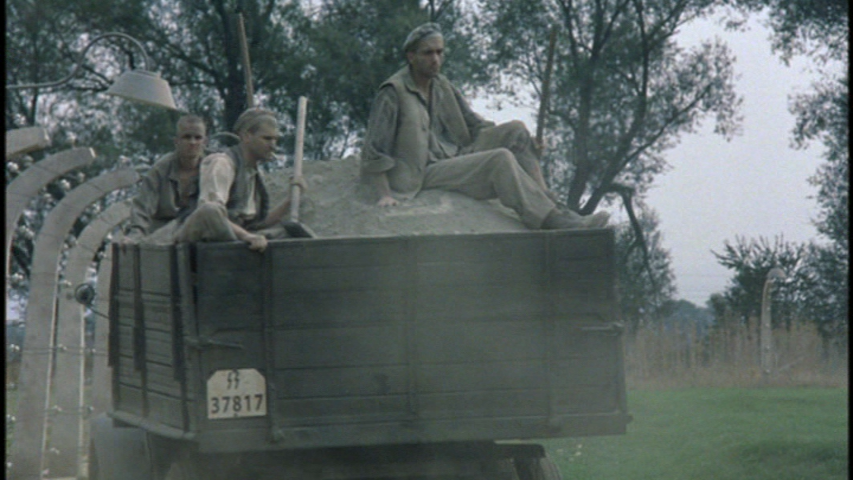